Rust & Gold is the best Neil Young Tribute band in the world.
Re-creating his sound, charisma, creative to near perfection, Rust & Gold shines and sets the standard of a
true tribute to the music of Neil Young.

Just a few places we put on SHOWS: Mattie Kelly Arts Foundation, Club LA, Baytowne Amphitheater, Gulf Place Amphitheater, The HUB 30A, plus anymore locations and Charity Shows. We have upcoming theatre shows through 2023 across Florida to Texas. To get on our list please email Rustandgoldband @ Gmail.com

Warehouse 360 “Rocking In The Free World” Cover by Dylan/Young Tribute.

Rust &Gold is an authentic sounding Neil Young and Crazy Horse Tribute Band. Our goal is to keep to the true creative sound of Neil’s acoustic, harmonica, electric and keys.  A true Neil Young Tribute!

History of Rust & Gold.
All of Rust & Gold Musicians are seasoned professionals, playing music and gigs for years. Nic Turner was performing mainly solos of Neil Young at multiple venues for a few years pulling in customers with his near exact voice to Neil Young. After suffering a stroke Nic picked back up a guitar and started playing the songs of Neil Young. This has been a HEALER for Nic as he pulled back 99%. Started playing in Restaurants, Bars, Wine Bars and weddings. Nothing tops a song of “Harvest Moon” at a wedding anniversary! The focus for Nic’s marketing was the main hits of Neil Young that are popular to his fans. Nic started the “Nic and Friends Show” and booked over 150 shows in 12 months in Destin, Miramar Beach and 30A areas.  Nic invited his good friend Scott Rockwood to join in on several acoustic shows as a duo. Scott is a master musician playing in popular bands for many years from St. Louis to North West Florida. His skills are sought after by many of the areas top bands and musicians for guitar, vocals and professional recording. e is the Beachcomber Award Winner for Best Guitar Player. Rust & Gold 2022 consists of Nic Turner (Main Vocals, Guitars, Harmonica), Mel Senter (Bass, Vocals), David Beaver (Keys, Vocals), Cameron Mitchel (Drums, Vocals).

Scott contacted Nic and together they put together the band Rust & Gold.  Scott brought it all together with  his long time partners in music Shawn Hartung, Dan Hall and Roberto Padron. Live videos on facebook. Covers of “On The Beach” and “Cortez The Killer” 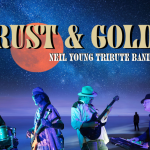 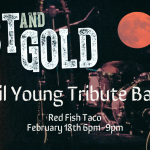 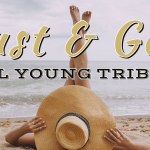 We are happy to be back at Little Village. An intimate venue that is up close and personal.Join us on Feb 11,2022 for an Ultimate Tribute to Neil Young.

Helpless
Harvest Moon
Old Man
Vacancy
Heart Of Gold
Mr Soul
Long May You Run
Hank To Hendrix
Down By The River
Like A Hurricane
Walk On
Rocking In The Free World
Cowgirl In The Sand
One of these Days
After The Gold Rush
Buffalo Springfield Again
Only Love Can Break Your Heart
Unknown Legend
On The Beach
Cinnamon Girl
I Believe In You
Don't Let It Bring You Down
Sugar Mountain
Comes a Time
Cortez The Killer
Out For The Weekend
Four Strong Winds
Powder Finger
Needle and the Damage Done
Natural Beauty
Tell Me Why
And so many MORE! All songs are Copyright by the Respected Author(s), Publishers. Rust and Gold is a Cover Band and claims no ownership or copyright whatsoever to the above songs,, titles, etc.